Here's a simple guide to get you started if you want to learn how to pentest in cloud platforms. The Shift to Cloud

Let's take a brief look at why cloud security is such a hot topic before we get started with cloud hacking!

Companies are rapidly migrating from on-premise and data center hosted infrastructure to hybrid architectures that include cloud hosted Infrastructure as a Service (IaaS). What is the reason behind this? There are several benefits of using the cloud:

Amazon Web Services, Microsoft Azure, and Google Cloud Platform are the three largest cloud service providers at the time of writing, with a combined market share of over 60%.

With the rapid rise in adoption of cloud computing, businesses are increasingly in need of individuals who can manage, secure, and perform security audits on this new type of infrastructure. According to the US Bureau of Labor Statistics' Occupational Outlook Handbook for Information Security Analysts, released in September 2021, cybersecurity professions in general are one of the fastest-growing professional sectors, with roles linked to cloud security in particularly high demand.

Failing to prepare is preparing to fail. This is especially true for cloud migrations. It may appear simple to “lift and shift” existing services to the new infrastructure, but it necessitates careful preparation from a variety of angles, including security. Simply migrating an infrastructure or application to the cloud does not guarantee security, scalability, or redundancy. Some of the most common cloud security blunders are listed below.

Now let’s go ahead and examine some common cloud services, and start hacking!

Cloud storage is appealing due to its ease of management and high scalability. However, many businesses have suffered reputational damage and financial harm as a result of publicly accessible misconfigured storage buckets on AWS, Azure and GCP, or by unintentionally storing private data on properly provisioned public cloud storage.

Previously, this was due to the fact that when an administrator created an Amazon S3 (Simple Storage Service) bucket, the pre-populated settings enabled public access by default. However, Amazon soon began to display a warning when creating a bucket, informing users that the resource and underlying data will be public.

A further warning was displayed when configuring files uploaded to the bucket to be world-readable.

Despite the fact that the S3 bucket creation settings are now secure by default, and several warnings alert administrators to unsafe configurations, data breaches caused by leaky S3 buckets continue to occur.

There are websites such as https://buckets.grayhatwarfare.com/, that allow us to search AWS S3 and Azure blob resources containing publicly accessible data.

Consider the following case study of Mega Bank, a (fictitious) corporation that has asked us to perform an assessment of their cloud infrastructure.

Inspection of the website source code reveals that website images are being stored in an Amazon S3 bucket named megabank-supportstorage.

Note: While this article focuses on AWS, security problems originating from poor configuration of cloud services can affect AWS, Azure and GCP (and other cloud platforms) equally.

Let’s install the AWS CLI in order to interact with this resource.

Then, to recursively list the contents of this bucket, issue the command below.

As expected, this reveals website images, but it also appears that some critical information was stored there by accident. To download the penetration test report locally, execute the following command.

The report contains a number of high and critical vulnerabilities that, if not addressed, may allow malicious actors to compromise the company network and access their data.

Another cloud service implicated in huge data breaches is the AWS Instance Metadata Service, which provides administrators with information in order to configure and manage their Elastic Compute Cloud (EC2) instances. The Instance Metadata service is bound to the IP address 169.254.169.254, which is an internal link-local address that is not exposed or routable externally. We can interact with the service locally via a REST API. Issue the command below to return the EC2 metadata.

This metadata can contain sensitive information such as credentials, if the administrators have attached an IAM role to the EC2 instance. As the metadata is only accessible internally, this may not appear to be particularly interesting from a security perspective. The presence of this metadata, on the other hand, makes Server-Side Request Forgery (SSRF) vulnerabilities in applications that are hosted on compute instances even more serious.

While the methods discussed in this post will work in cases where the legacy version of Instance Metadata Service (IMDSv1) is enabled, they won’t work with the more secure IMDSv2, which requires token authentication. However, IMDSv1 is still enabled by default, which means that this problem is still extremely important.

This time the (fictitious) customer Mega Logistic has requested a security assessment. Inspection of their website reveals multiple services, a portal, and link named Status.

The Status link takes us to the page status.php, which contains functionality to check the status of company services.

Examining the source code reveals that a hidden form is used to pass the default value of megalogistic-prod.htb to the backend page, which is somehow involved in obtaining the status.

Inspection of the request in Burp and also in the address bar reveals that the default value is provided as a value to the name parameter in a GET request.

Navigating to the path /latest/meta-data/iam/info reveals that an IAM role named support has been attached to the EC2 instance.

Issuing the request below is successful, and we gained some keys for the IAM user!

The AccessKeyId and SecretAccessKey are used to sign programmatic requests that we make to AWS. We also see a time-limited session token, provided by the AWS Security Token Service (AWS STS), that allows us to authenticate to cloud resources. The command aws configure allows us to save these values to an AWS credentials file, located at ~/.aws/credentials.

Next, separately issue the command below to add the session token to the credential file.

Issuing the following command (effectively whoami for AWS) verifies that our current role is support.

Now let’s see what privileges we have.

These examples have shown just how quickly and easily a cloud environment can be compromised, owing to misconfigurations and leaving default settings unchanged. It’s critical to be aware of the risks, and to plan ahead before migrating and provisioning cloud infrastructure.

A kill chain is useful to conceptualize and associate the steps that attackers might take in different phases of their operation.

Recon involves enumeration and footprinting of the cloud infrastructure attack surface, as well as interacting with publicly exposed cloud services. Low hanging fruit such as S3 buckets and Azure/GCP storage buckets might yield cloud and SSH keys, passwords, confidential documents and personally identifiable information (PII). With access to keys or other credentials, we could look to infiltrate the target environment. Initial situational awareness activities will be undertaken, such as identification of other cloud resources and of the permissions and privileges associated with their current user or application.

With a foothold in the cloud infrastructure, we would then look to undertake privilege escalation activities. Privilege escalation within a specific cloud resource or the general cloud environment is useful, as it allows us to undertake additional activities, such as accessing other users’ data and cloud shell files, or capture traffic, and demonstrates the impact of our compromise. Being able to assume the role of a more privileged user also increases the likelihood of us being able to move laterally between cloud resources, accounts (AWS), projects (GCP) resource groups (Azure), or move laterally from an Azure tenant to an on-prem AD domain. In the final stage, we can demonstrate impact by the secure exfiltration of resources (assuming that this has been approved by the client).

I hope you have enjoyed this introduction to cloud security, which is such an interesting topic! For further hands-on hacking and learning about cloud security, check out the Hack the Box machines Bucket, Sink, Stacked, and our new breakthrough BlackSky cloud labs for Enterprises. 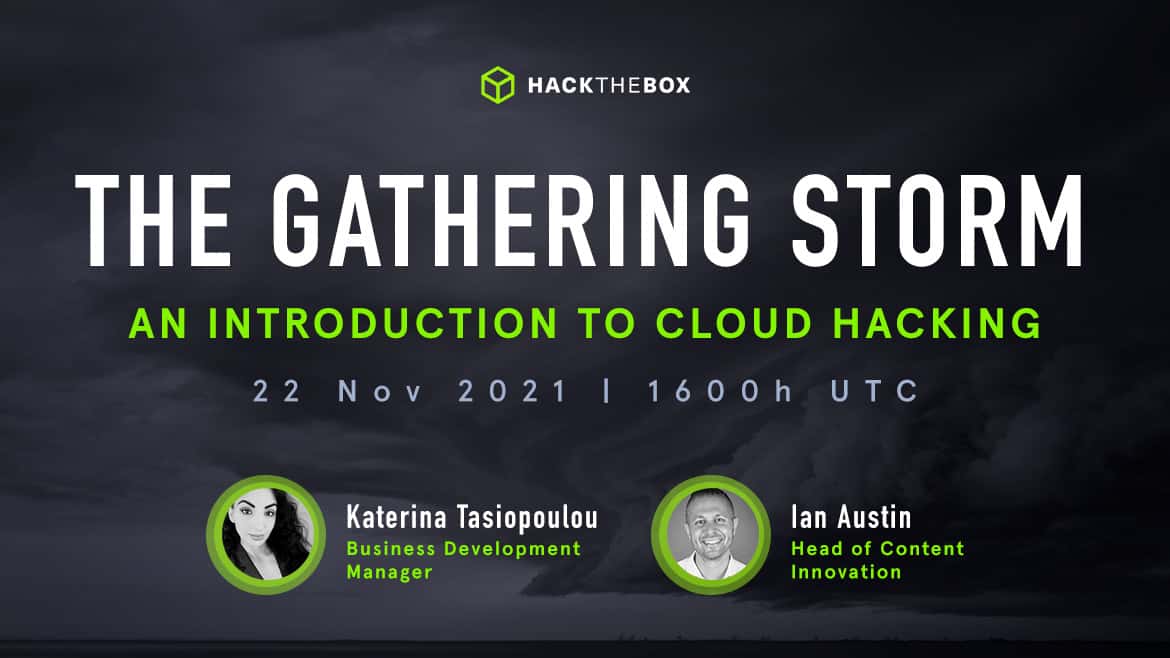 If you want to learn more about cloud hacking, sign up for our upcoming The Gathering Storm webinar on November 22nd. This is a great way to start your learning journey when it comes to pentesting in the cloud. Click here to register.